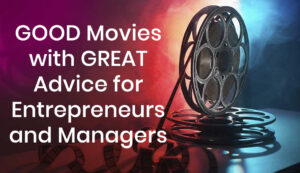 My #GoodMarketingAdvice is a little different this month. We try to send you a lot of advice on how to market, where to market, when to market etc. However, it’s nice to change it up with a FUN tip or two.

So, with that being said, here are my TOP 5 MOVIE PICKS that every entrepreneur or marketing manager should watch. For these purposes, this list is in my ‘Non-Sports Movie’ category. That’s a whole different list and an awesome one at that! However, all of these left me inspired in some way. Some are true stories, some are fiction, but all of them have a great marketing message.

NUMBER 5: The Greatest Showman (2017)
BASIS: SOMEWHAT TRUE, MUCH FICTION
The theme here to quote the movie: “No one ever made a difference by being like everyone else.”

Think big, believe in big and you will be big. I will admit, this is a guilty pleasure. Yes, it is a musical, but the music is good and the story is fun. This is loosely based and very ‘Hollywoodized’ on P.T. Barnum, known as ‘The Great Showman’.  It deals with following a dream through many, many setbacks. However, we see that setback becomes a great innovator and spark igniter. He’s never waiting around long enough for the idea to go stale without updates and reinvention. Barnum continues to innovate, improve and repackage what most people have discarded. But an even bigger lesson in this one is to keep your eye on the prize of your original vision, not all the other prizes. Barnum finds discipline in the vision, the team dynamic and ethics are the key to success.

NUMBER 4: Glengarry Glen Ross (1992)
BASIS: FICTION
The cutthroat theme of this story: Competition is rough. Sales are rough. It can make you better or break you depending on how you react and adapt.

First things first on this: if you are in sales, you must see this movie! Period. The story revolves around four New York real estate salesmen who become desperate to sell their weak leads when a tough representative is sent by the head office to motivate them. In a nutshell, in one week, all except the top two salesmen will be fired. Yes, it is harsh. It is at times uncomfortable. It is mostly outrageous. The lengths the competing sales people are willing to go to is not exactly endorsed by ethics trainers, HR, or the law for that matter. Now, there are schemers in this movie who want to compromise the ethical boundary on every side of every equation. That is NOT what I am advocating. But, the cut-throat nature of big ticket sales, big ticket sales competition and big ticket sales stress – including the ups and downs  -are very relatable… but NOT the crime.

NUMBER 3: The Founder (2016)
BASIS: TRUE-MOSTLY
The overwhelming theme of this is persistence.

This is the story of Ray Kroc who founded McDonalds. While his character changes throughout the movie and you form this love-hate relationship with him, it does good job of showing Kroc’s desire, determination, and plan to form a business empire. Caveat and maybe a spoiler here: not all of his methods are what I would condone. According to this version of the story, he was pretty ruthless. The take away? Never, never give up. But, with great power comes great responsibility. This movie will also leave you with some sense of how to succeed at your business dream, as much as how not to. Which, in my mind, is always just as important of a lesson.

NUMBER 2: Tommy Boy (1995)
BASIS: FICTION
The theme: If you have passion, you can’t fail. It may take some time to find your groove, but NEVER give up.

Yes, this one is fiction but incredibly fun fiction, and a movie that every salesperson should see (in my opinion). As a salesperson and former sales manager myself, I love this movie. While it is outrageous comedy, I find this to have one of the best sales messages of all time. After losing his father to a heart attack, Tommy needs to save the family auto parts business and its Ohio town it employs with a ‘Hail Mary’ sales road trip. He tries to use his father’s reputation, sales methods, and style. Which all fail (of course)! Finding his way, his style and what works is a journey. If you’ve ever been in sales, you realize how much this concept hits home.

NUMBER 1: Glory (1989)
BASIS: TRUE AND CONSIDERD VERY ACCURATE
The theme: If you believe above all else that you can succeed and make a difference, nothing can stop you.

This is one of my favorite movies of all time and most definitely applicable for Black History Month. During the Civil War, then Captain Robert Gould Shaw is essentially told by his parents he is taking the job nobody wants, nobody has experience with and is – for all intents and purposes – a joke: Commander of the first black combat regiment. After not taking his last assignment serious enough, and getting wounded because of it, Shaw decides to take this on with the promotion to Colonel. He and his new black regiment are ridiculed, ignored, threatened, mocked, short-supplied and paid less by other union officers. To quote a character in the movie, “Marching is probably all they’ll ever get to do, Robert”. That, however, was no obstacle. He lifts people “who’ve known only degradation” (as quoted in the movie) to “pride and dignity”, succeeding beyond measure through determination, hard work and sacrifice, for the betterment of those around him. A true story of beating the odds, lifting, and winning as a true underdog team to new heights while changing the world.

In closing, it’s obvious I love movies. Some are great to be taken somewhere else for a while. And some are meant to hear someone’s story. But the movies and stories I can relate to, are the one’s that show how a character breaks away from the expected in this world. When you’re looking for direction, look no further then the people who have gotten there before through similar circumstances. Even fiction has it’s elements of human nature and truth. Except you get to write the ending.

Have a GOOD week.

No comments to show.